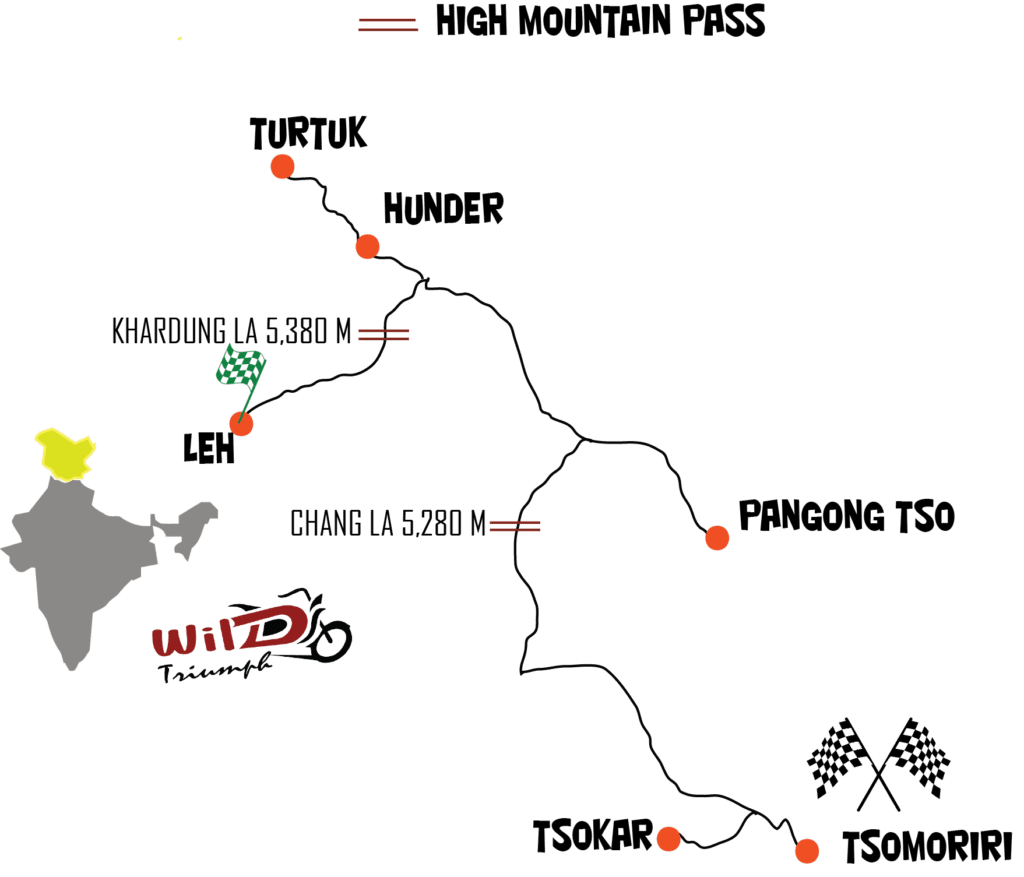 Board an airplane booked by us from New Delhi International Airport. Our services commences as soon as you arrive at Leh airport. In order to acclimatize completely we advise you to take a complete day of rest. Later we will be brief you with the tour details, road conditions and guidelines. You will be provided with Royal Enfield 500cc / Himalayan Motorcycle. In the evening you can visit the Sunset @Shanti Stupa and Leh Palace.

An early breakfast today at hotel as we leave early to visit the famous Lamayuru Monastery which is the house of more than 300 monks. Lamayuru Monastery performs spiritual activities on daily basis and is a reflection of Drikung & Kagyu tradition.  On our way back we will witness the enchanting beauty of moon land, extraordinary magnetic hill, and Alchi Monastery.

Breakfast along with morning briefing. Then we ride towards Hunder early morning. Refreshment / lunch is served in Hunder before we leave for Turtuk and Thang.  Later in the afternoon you will arrive at Turtuk. You can explore the last outpost of Turtuk at Thang after which Pakistan controlled Gilgit begins. We  will then leave for hunder and reach our hotels late evening.

Yet again we start our day early today as we prepare to leave for Pangong Lake via Shyok route. Pangong Lake or Pangong Tso situated at a height of 14,270 ft is an endorheic lake known for its clear blue water and fascinating landscapes.  You can end your day in the oasis of serenity, dinner and bed will be arranged in the swiss camp accommodation near lake.

After having breakfast, we will cross Changla Pass situated at 17,350 ft. (3rd highest motorable road in the world) to head back to Leh city.  The ride will leave you spell bound with the majestic views and panoramic landscapes. Overnight stay will be arranged in hotel.

Today we head towards the most magnificent and picturesque Tso Moriri Lake. It is a very extreme journey (220 kilometres) with cold winds and thin air even during summers. Our tour leader will make sure that you remain safe and sound throughout your ride. Dinner and bed will be arranged in campsite near lake.

The day starts with a healthy breakfast and coffee. Prepare to head back towards Leh via Tso Kar. Tso Kar Lake is situated in Rupshu Plateau south of Ladakh. It is a protected wet land park with snow clad mountains and panoramic view.

Cross the mighty Tanglang La pass (17,480 feet) on way back to Leh. Later in the evening after reaching our hotels you will return your rides to the management. Riders are free to visit local Leh bazaar and other nearby places to collect souvenirs for friends and family.

This is the last day of this amazing expedition. We leave this day for you to explore this beautiful city and to shop for souvenirs.

This brings an end to this beautiful Ladakh Motorcycle Tour leaving you with memories enriched with happiness which will contain within till eternity. Hotel services will remain till 11:00 in the morning which will include morning breakfast as well. You will be given a strong farewell by our team for your good health, success and happiness for the rest of your life. Ya Jullay!!

The motorcycle tour of Ladakh includes latest bikes and gears that are required during the expedition. We have an experienced crew that is a specialist in local knowledge. The routes that we choose are off beat. We make sure our riders face minimum traffic and only indulge in a trouble free ride. Our equipment’s are flawless that adhere to the guidelines of European standards.

In case of any kind of emergency we provide medical aid & on call doctors.

Besides, we care for our riders and we make sure that the Support Truck & Backup vehicle keeps following us during the ride that keeps your luggage and spares handy.

The staffs are professional and experienced in hospitality industry that focuses on the details to make your journey memorable.

We only offer premium accommodation and deluxe resorts to our clients. At the end of a tiring day, who does not want a good night’s sleep?

Check out our Ladakh Motorcycle Tour reviews on Trust Pilot

What made the trip success was the crew. Just fun people who were aware and would go out of their way to make sure riders are happy.
Taylor

We did a motorcycle tour of Ladakh in 2019 with Wild Triumph and it was very impressive. We are planning again with them for Nepal in 2021..cheers.
Brad

What a tour! Memories will linger for a lifetime and I know that for certain I will return to India to explore more of this fascinating land.
Aryan

Whether you want to tour solo, in a pair, or with friends.
On set dates or your own dates - it's all possible.
You choose what suits you best !

For each tour, there are fixed-date departures. Groups consist of 16 bikers max, pillions excluded.

If no fixed date suits you, and you prefer to tour with your bunch of biker friends, this is the package you need.

Looking for a Solo Adventure? Freedom is yours!… Want to travel alone or in a small group, without a tour leader? Of course!

Lying on the Plateau of Tibet, Ladakh is considered to be among the most elevated and most difficult terrains in India. It is an amazing destination and home to numerous monasteries and temples. The capital city of Ladakh, Leh, is also alluded as “Little Lhasa”. Ladakh, prevalently known as “the place of spiritualist Lamas” is one of the top most preferred traveler’s bucket list destinations in Asia. At an altitude of 11,480 feet Leh is considered as an extension between the land and sky. Leh Ladakh is house to excellent medieval cloisters, some prettiest villages, cold deserts of Nubra, high passes like Khardung La & Chang La, sensational landscapes, arid mountains and rivers, and profoundly imbued Tibetan-Buddhist culture!

The best way to begin any motorbike adventure is by embarking on a Ladakh motorcycle tour!

Temperature is great during summers, route is adventurous, and the city is not packed with tourists. Thus making Ladakh ideal for a bike trip.

This challenging motorcycle tour takes you to the amazing and most scenic three Lakes of Ladakh; Tso Moriri, Tso Kar, and the Pangong. Not to forget the ride to the widely acclaimed highest passes of the world; Khardung La & Chang La. It has been our best bike tour for a decade and we have been conducting this expedition multiple times each year.

Take a look at our Motorcycle Tours for more route and itinerary options.

Put on your helmets and venture into an adventure, the hardest & the toughest of all yet the most noteworthy motorcycle tours in the World.

The delightful vistas and the majestic Himalayas will welcome you as soon as you land on this amazing city of Leh. The streams of the Himalayas stay with you all through the route as you move higher into the mountains and battle the absolute pinnacles of the world.

A fascinating yet challenging motorbike journey, it is the route from Leh to the Lakes, Passes and the Valleys that draw riders from all throughout the world to indulge in this adventure. Your partner “Royal Enfield” makes this journey immensely joyable and lets you indulge with nature. If you have a genuine rush of bike riding, you ought to experience this amazing motorcycle tour of Ladakh. In this Fixed Departure tour with Wild Triumph you can appreciate Motorbike ride through picturesque and mesmerizing Himalayas for 9 days or you are welcome to provide us a customized option as per your convenience. For the fixed departure tour the maximum riders who can join the tour are 12-14, for a customized itinerary where you come along with your own group, the minimum rider requirement is 8 and there is no upper limit. And yes you can bring along your spouse as pillion!

You can depend on us to handle your inquiries by email or telephone. Trustworthy and honest answers, straightforward terms and conditions are our core business principles. Holding an Indian origin, our recommendation is established on our everyday experiences. We are a direct tour organizer; and are your one-point contact for information, inquiries, and booking. Our down to earth and modest staff ensures a perfect getaway which you had imagined. Tell us what you have in mind and we’ll set you up with the ideal itinerary.

Leh Ladakh covers around 117,000 square kms of the Himalayas and is often called as the Ladakh Range. It is a southeastern expansion of the Ranges of Karakoram and Indus River valley. Ladakh is among the most elevated regions of the world. Its characteristic highlights comprises of cold desert plains and profound valleys. The desert prevails in the east of Ladakh and towards the south east at a height of 13,500 feet is the fascinating plateau of Rupshu.

Heading towards the north west of this plateau we find the Zanskar Range. The majestic and magnanimous Zanskar range is home to many important peaks and passes of the world! Kamet Peak at a height of 25,446 feet is a part of this amazing mountain range and also the astounding Shipki La, Lipu Lekh, and Mana Pass, yet another reason to venture into this amazing Ladakh motorcycle tour.