Fastest Production Motorcycles In The World 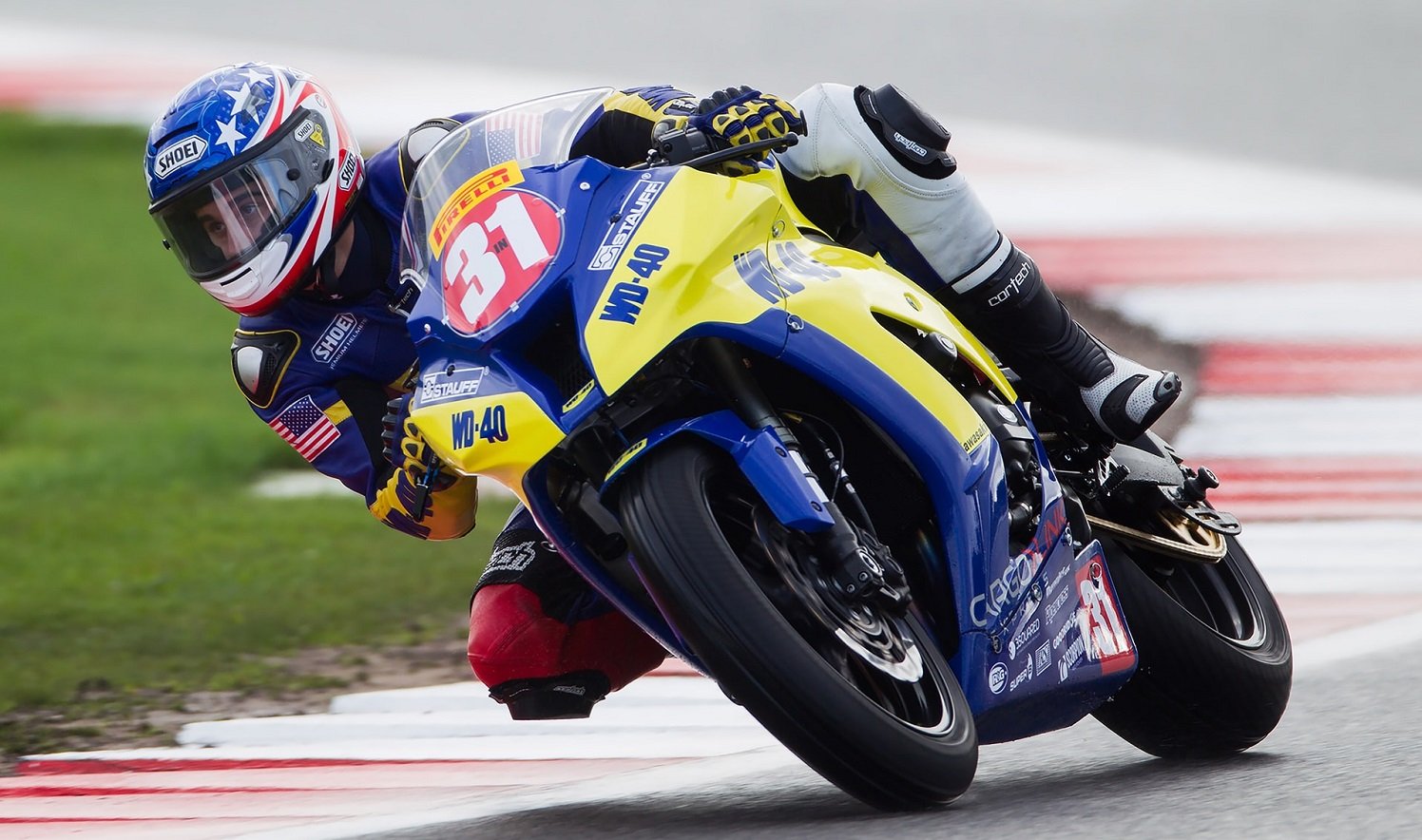 What is often the most cherished thing about a bike? Speed, of course!

Motorcycles are beautiful creations of human genius. The faster they go, the harder our heart pounds. Most modern sports bikes already accelerate to speeds beyond 300 km/hour; however, their capabilities are deliberately “restricted” for the sake of safety.

At the end of the last century, the representatives of the motorcycle industry seemed to compete with each other, creating faster and more powerful motorcycles. Each manufacturer tried to outperform the other by releasing motorcycles at a higher speed than their competitors. But literally a dozen years later, a gentlemen’s agreement was made to limit motorcycles in speed. The maximum value should not be higher than 299 km/h. This was due to the increased number of accidents, including fatalities, caused by the owner’s desire to show everything that his iron horse is capable of.

However, in order to accelerate on such motorcycles beyond 299 km/hour, these restrictors or limiters can be removed. Although it is not recommended, but by following few simple procedures, almost any liter sports bike will be able to exceed this speed.

As of now, we are going to discuss fastest motorcycles, which are initially tuned to speeds close to the cherished 300 km/hour. These fast motorcycles are also nick named as “Hyperbike” due to their enormous rage and speed. Obviously, we are going to talk only about production motorcycles and those which you can buy from a dealer or a private seller and personally test on the road.

Top 10 Fastest Motorcycles In The World 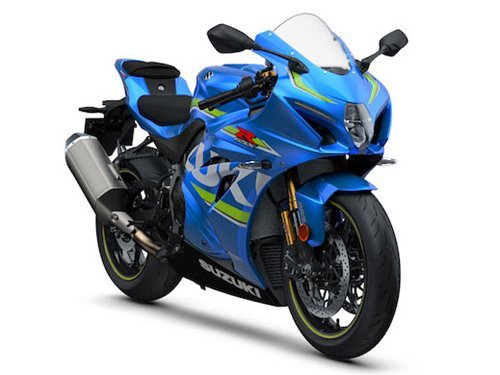 The Suzuki GSX-R1000 is the flagship model of the Japanese brand. This motorcycle incorporates all the modern technologies. In its current configuration, this bike is equipped with a 999cc 185HP engine, thanks to which it can reach a top speed of 299 Km/hour! More precisely, the GSX-R1000 is capable of going even faster.

However, it has electronic stops that prevent the motorcycle from accelerating above this mark. This is done to comply with safety requirements. The first version of this sport bike was introduced back in 2001.

Since then, the bike has been refined 9 times, and the current configuration is the L7, introduced in 2017. It is equipped with a unique traction control system with an inertial measurement unit, which ensures uniform vehicle retention while riding. 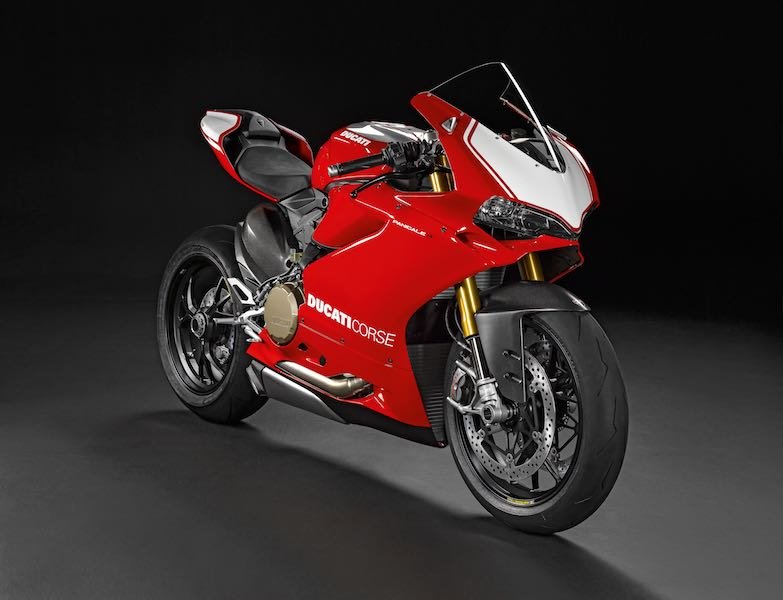 The Ducati 1199 Panigale R is also restricted with a speed limiter. It is capable of doing more than 350km/h, but the locking system fixes the maximum acceleration at 299 Km/hour.

This immense power is achieved due to the 1198cc 195-horsepower two-cylinder motor, made of high-grade magnesium alloy. The 1199 Panigale R is not only fast, but technology sound motorcycle as well. It is equipped with an electronic control system that allows you to reconfigure the characteristics of the chassis with the push of a button on the handle bar.

For instance, while riding in the rain, the maximum engine power decreases. So a simple rain mode feature makes the motorcycle extra sensitive to every movement of the pilot. The response to the throttle stick becomes sharp and instantaneous thus providing more grip to the rider.

This motorcycle was first manufactured in 2011, and was later replaced by the 1299 model with a larger displacement engine. But the speed record is still held by the Ducati 1199 Panigale R. 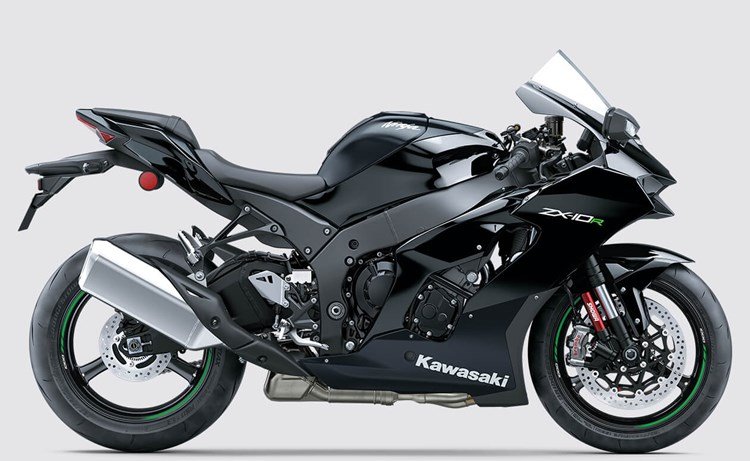 The Kawasaki Ninja ZX-10R is another victim of speed limiters. Thus, due to electronic locking systems, this motorcycle is not capable of accelerating faster than 300 km/h.

But, in theory, it is capable – since it is equipped with a very powerful 200 Horse power 998cc engine with a torque of 112 NM and is carried by a lightweight body. In particular, the bike weighs just 201 kilograms, which is less than the previous models in the ranking.

Like other Kawasaki models, the Ninja ZX-10R is highly technological. It is equipped with ABS (anti-lock braking system), gear shift assist, suspension adjustment and other technological solutions designed to make the riding more comfortable and the ride safer.

The motorcycle is currently in production and it is presented in several configurations, differing in capabilities and technologies. 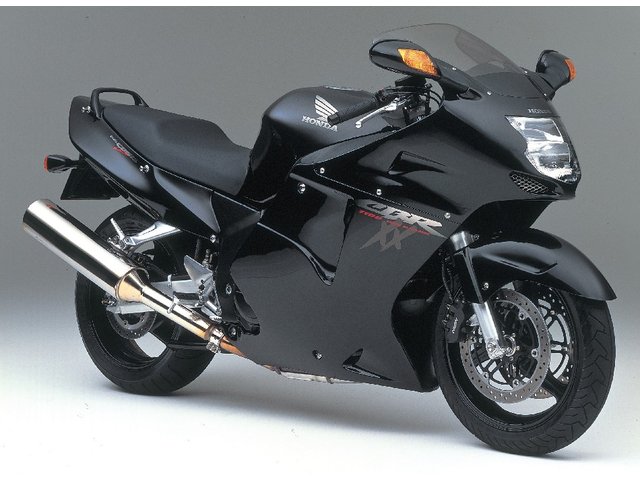 Honda CRB1100XX Super Blackbird is the fastest motorcycle from this Japanese manufacturer. Although this model has long been discontinued, current bikes are equipped with an acceleration lock system. And the Blackbird did not have it – so it was able to accelerate to 305 kilometers per hour.

Blackbird was manufactured between 1996 and 2007. In 1997, it was this model that held the world speed record, thanks to the 1137cc 152 Horse power engine, which was complemented by a double balance shaft for a smoother ride.

Additionally, the motor is four-stroke. The Super Blackbird is named after the Lockheed SR-71 supersonic reconnaissance aircraft. And somehow these two “machines” are similar due to their aerodynamic streamlined body, aggressive design, as well as their speed records.

One of the most popular, successful, and famous sports motorcycles of the Japanese brand; Suzuki – GSX-F750 – was first released back in 1985. And so far it has not been discontinued. New variants, generations, and iterations are released regularly, thus, proving the immense popularity of the bike.

Till date, 12 generations have been manufactured; the last one was released in 2011. The maximum speed of this motorcycle is 306 Km/hour. It is fast, thanks to the specially optimized sporty design. The bike is equipped with a 750 cc 150 Horse power engine which produces a torque of 86 NM. However, thanks to its low weight of only 190 kilograms, it can accelerate quite astonishingly.

The Suzuki GSX-R750 is also very economical. Fuel consumption is only 6 liters per 100 kilometers, so it and you can travel up to 283 kilometers on one full tank (17 liters). So you can opt for this motorcycle for intercity travel as well. 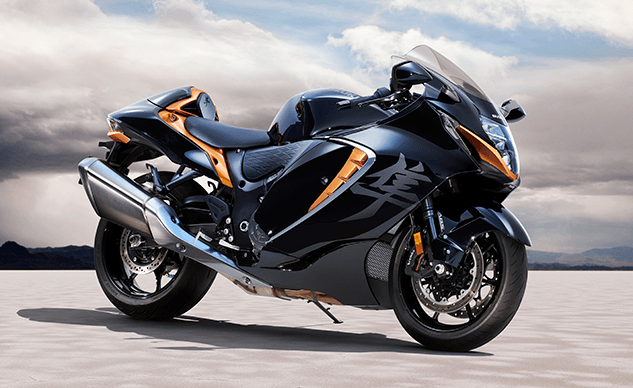 The Suzuki Hayabusa is a truly iconic superbike that has long been considered the fastest motorcycle in the world. It is capable of accelerating to a speed of 312 Km/hour.

Such impressive parameters are achieved by a 4-cylinder 16-valve engine equipped with a 1340cc chamber that produces a maximum power of 197 Horse power. It takes just 2.5 seconds for the bike to reach 96 km/h. In addition, the engine is complemented by a specially developed fuel injection system and an idle control system.

Suzuki Hayabusa is still in production, but it has only two generations since its first release in 1999. The most current configuration – GEN2 – was introduced in 2008. However, modern models are equipped with a speed control system that limits the maximum acceleration to 299 km/h. 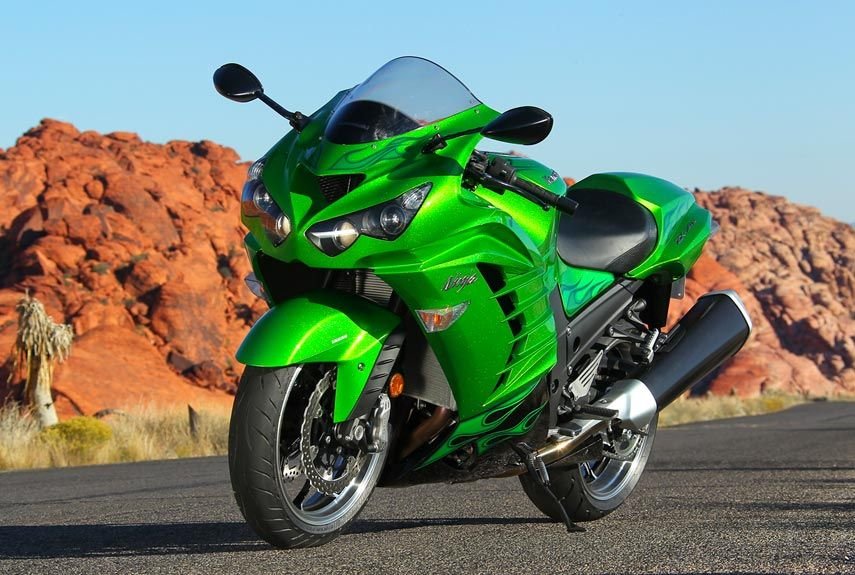 The Kawasaki Ninja ZX-14R is a near perfect sports bike. The company was forced to redesign its engine in order to maximize performance. And yes, they succeeded!

The first configuration of this superbike was introduced in 2006. And since then it has been released practically unchanged – only cosmetic changes have been made. It is also worth noting that the bike comes with an electronic speed limiter installed, which can be disabled upon request. 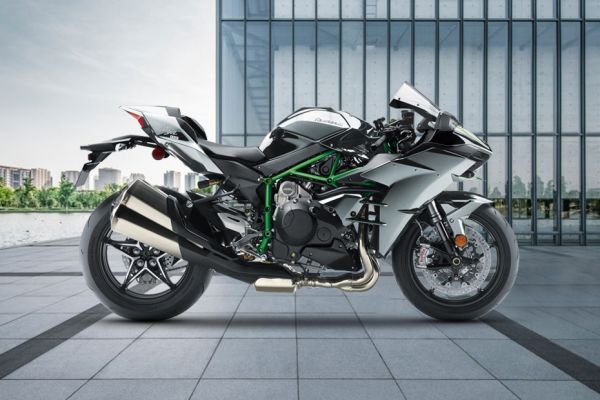 The Kawasaki Ninja H2R is a hyper sport bike. It is literally built to embody speed. Of course, its technical characteristics may not seem as impressive as those of its peers in the rating, but, the elaborate design and optimized chassis makes it impressively fast – up to 400 km/hour.

The motorcycle is equipped with a 998cc DOHC inline 4 engine with a maximum power of 300 horse power. In addition, it has a 6-speed transmission, a specially designed high-efficiency supercharger with a so-called “dog ring”, and a lattice frame “inherited” from professional sports bikes.

The Kawasaki Ninja H2R was first introduced in 2015. And, according to the specifications, it is basically not intended for use on the streets or in the city. This is just a track bike designed specifically for motorsport. Therefore, it is not equipped with a speed limiter. 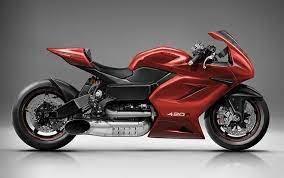 MTT Turbine Superbike Y2K is equipped with a gas turbine engine, which has a similar design to the aircraft. Yes, these motors are used in airplanes too. That is why it is capable of accelerating to an impressive 403 Km/hour! And, yes, there is no speed limiter on this bike.

But the main feature of the MTT Turbine Superbike Y2K is not just speed; it is built for normal roads too. The company did not license it as a track and did not sign a speed limit agreement. Therefore, this superbike (in theory) can be seen on the streets – however, it is worth considering that it costs $150,000, for which it received an entry in the Guinness Book of Records as the most expensive production motorcycle.

The superbike is powered by a Rolls-Royce 320 Horsepower turbo shaft engine. In addition, it exists in an even more powerful 420 RR configuration – with a 420 horsepower engine and special sports equipment. As the pilots who tested this motorcycle said – “The most amazing thing is that there is absolutely no vibration. You hear the turbine, but you don’t feel it.” It’s a crazy and scary motorcycle; you will feel like you are bungee jumping, except you’re being pulled forward, not up.

However, it is worth considering that the MTT Turbine Superbike Y2K cannot be bought just like that. Firstly, its production is limited to five units per year, and secondly, the bike itself is sold only to select buyers. The manufacturer decides whether to ship the motorcycle or not. This is due to the fact that the turbine engine requires care; and the fact that MTT does not want the riders to die. 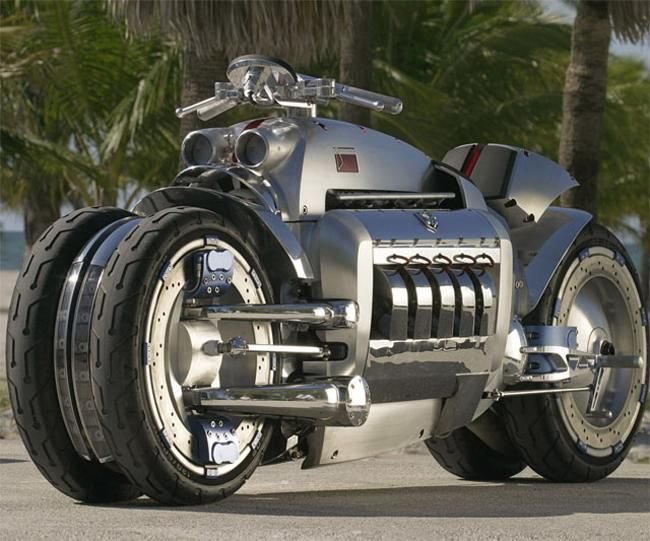 The Dodge Tomahawk is not a motorcycle. This is, as it was called by experts, “a motor on wheels.” A concept vehicle designed to showcase Dodge’s capabilities, the Tomahawk is the fastest production motorcycle ever. If, of course, 9 sold copies can be called “serial production”. Dodge Tomahawk is able to make even the most inveterate, extreme or “adrenaline addict” think about their own safety.

This motorcycle is capable of accelerating up to 613 Km/hour! This speed is achieved primarily due to the special 8.3 liter 500 Horsepower engine of the Dodge Viper series. In addition, the wheelbase has been redesigned to keep this bike on track. The Dodge Tomahawk has four wheels; two in front and two in rear. And each of them is equipped with an independent suspension.

However, there are few disadvantages; the motorcycle has a disproportionately small fuel tank, only 12.7 liters. So you won’t go far on it, except while traveling from one gas station to other, periodically looking at the service. The Dodge Tomahawk requires professional care and high quality fuel. All of this made the Dodge Tomahawk an impressive and impressively strange bike. And then Chrysler also “sealed” the price to $555,000. And as a result, now somewhere in private American collections there are 9 units of Dodge Tomahawk available; delighting the riders with a futuristic and masculine design.

In this blog we reviewed ten fastest motorcycles in the world. These machines are aggressive, fast, and much more advanced. While comparing any ordinary sport bike with these “Hyperbikes’, the former ones are much easier to handle. But even riding any ordinary sports bike should not stop you from following all the safety protocols.

Why the motorcycle won’t start?

How to prepare your motorcycle for the riding season