Top 10 most powerful motorcycles in the world 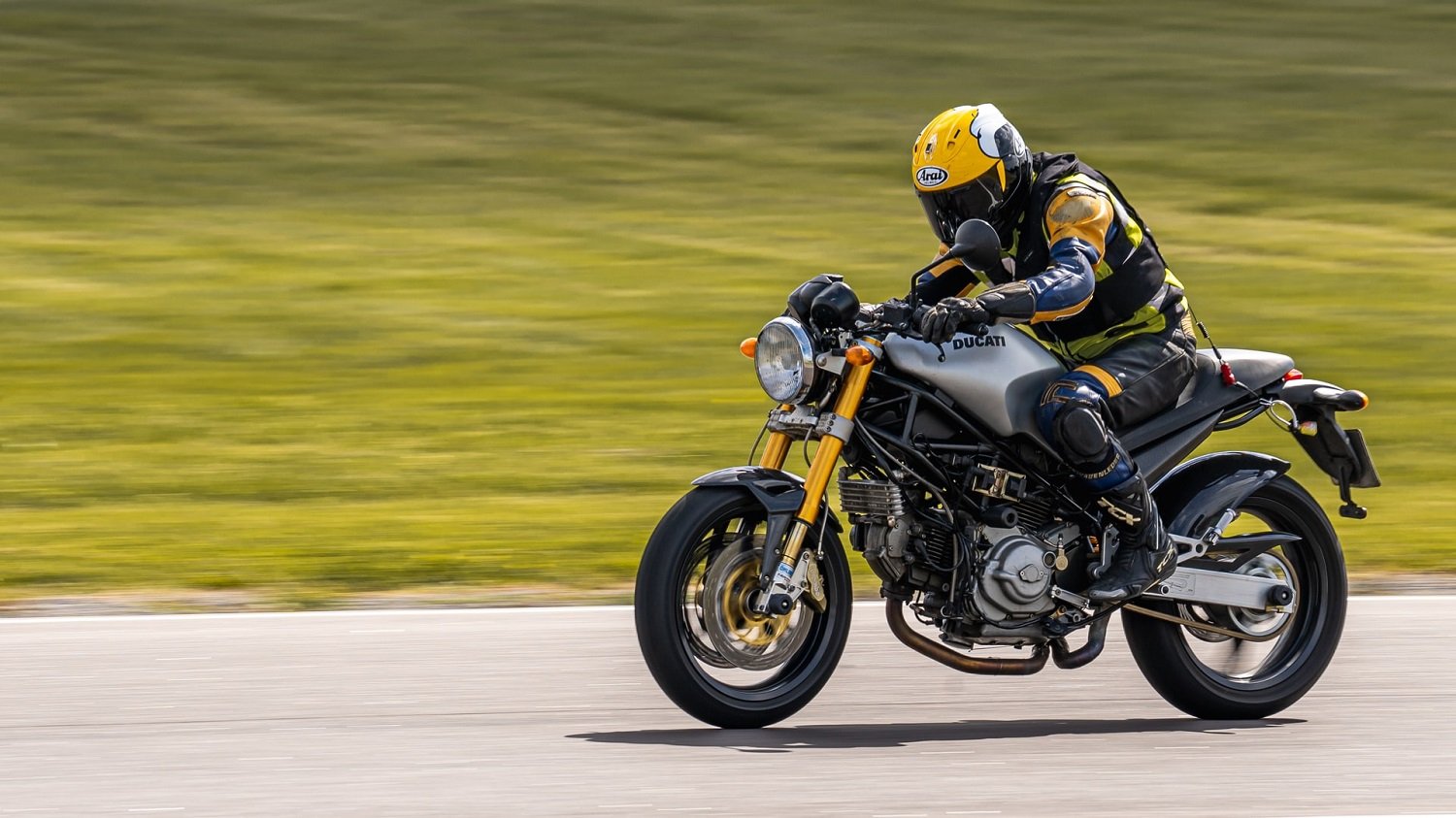 Let’s be honest, any vehicle that is seen on the road, the first thing we enquire about is its performance, and the second important question we do not forget to ask is its horsepower. Truth be told, this is not just the case with cars. Motorcycles, too, have long bowed to the dictates of sheer power, and so the manufacturers are producing behemoths on two wheels that no longer care for any speed limits! Here are the 10 most powerful motorcycles in the world. 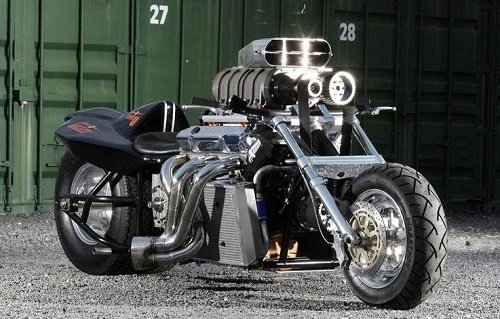 The Rapom V8 looks more like a truck disguised as a motorcycle. With an output of over 1,200 horsepower, it runs on alcohol – unlike any other motorcycle you have ever seen. This monstrous motorcycle was built in the garage of a British engineer Nick Argyle and its horsepower at the particular moment depends on the pressure of the turbocharger and, of course, the fuel.

The Rapom V8 usually runs on pure alcohol, some of it the rider may need as well, since no one sober and discerning would dare to drive this “Beast” on the road. Its cost is approximately $ 1,281,120 and consumes an average of 1 gallon of “fuel” in every 4 miles.

It goes without saying that “Rapom” is “Mopar” when spelled backwards and apparently all the creative energies were amalgamated while building the beast. Nick channeled his inspiration straight into the construction of the Rapom V8, which is capable of explosive acceleration thanks to the colossal power of the “Mopar” engine, long chassis, and two-speed transmission plus reverse. The sound of the launch is, of course, eerie and recommended only for people who have no sense of danger. 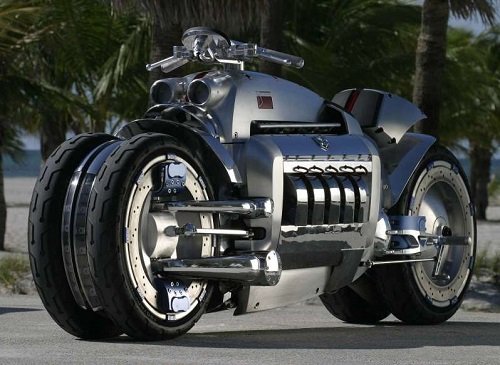 In the year 2003, Dodge unveiled a futuristic looking motorcycle at the North American International Auto Show in Detroit, which had a 500 HP V10 engine from Dodge Viper. Not only the bike has the second most powerful engine in the world, but it also holds the title of being the fastest motorcycle in the world till date.

TOMAHAWK has two front and two rear wheels, which makes it rather not a motorcycle, but a separate vehicle all together! The four wheels give this marvel of modern technology astonishing stability, and that’s not all; each of the four wheels have their own independent suspensions. While assembling the Tomahawk; titanium, aluminum, carbon, and magnesium alloys were used. All of these innovations were designed to reduce the weight of the proto bike.

According to the owners of this motorcycle, in general, the bike is very demanding in terms of fuel consumption and maintenance. And due to its enormous power and rage, the motorcycle tends to slip away from the rider. 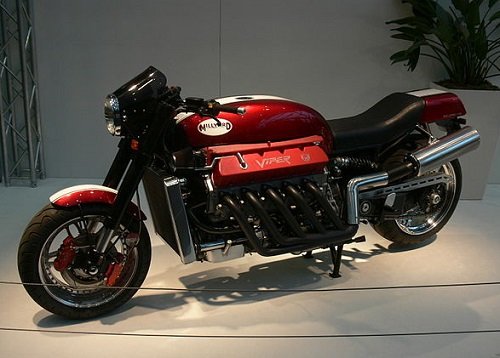 If you are upset about the fact that Dodge Tomahawk did not go on sale, there is a similar alternative from the makers of Dodge; The Millyard Viper. This motorcycle is equipped with the same V10 engine and with the same 500 Horses as in Tomahawk. That’s not all, this bike also boasts a full-size Viper radiator and a reinforced rear suspension.

Built by Allen Millyard, the motorcycle is equipped with an 8-liter Dodge Viper engine and is completely road legal. Allen has even registered the motorcycle, has all the documents, and even records a 6,500 km run on the odometer. Recently, he was seen on the Isle of Man, where he rode several laps on this beast. The bike even holds a record of 330km/h on the Bruntingthorpe aerodrome. As per Allen, the bike behaves well on urban roads, however, with such a monster you need to be extra careful. 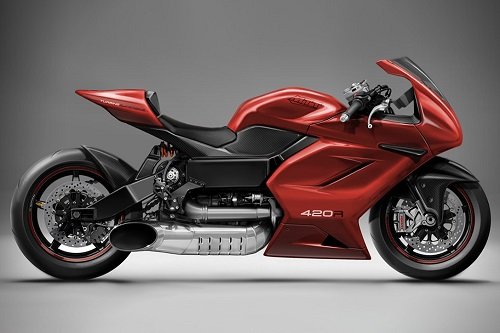 The American company, Marine Turbine Technologies, renowned worldwide for Y2K, have successfully come up with their next generation hyperbike. The MTT 420R is powered by a Rolls-Royce C-20B gas turbine engine that has a capacity to produce more than 420 Horses at 678 NM’s.

The motorcycle is equipped with an all carbon body, including the rims. And as for the brakes, the designers decided to equip the bike with an ABS system and use Brembo radial monoblocks, coupled with 340 mm brake discs.

According to the company, at the moment the MTT motorcycle with an engine from a helicopter is undergoing the last aerodynamic refinements, and will undergo tests on the track before its official launch. MTT is also working to legalize its creation for use on public roads. 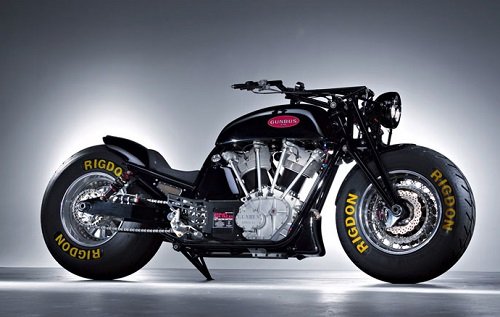 The design of this model belongs to the idea of ​​the German designer Clemens F. Leonhardt. At first, Clemens created many projects on sheets of paper, but in each of them something was missing. As it turned out, the missing piece of the puzzle were the dimensions of the machine he wanted to achieve. The final version of the motorcycle received a V-Twin engine with a capacity of 6728 cc, producing almost 350 HP.

Clemens Leonhardt had long thought about which tyres to use, their original concept was to fit Boeing 767 tires, and the designers even found a custom garage in Germany where they could place an order for these accessories. According to the creator of the model, driving on public roads with this motorcycle is completely legal. 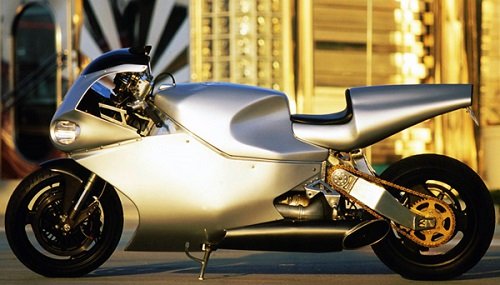 The Y2K was a very little known machine, until it appeared in the Hollywood movie ‘Torque’. Those who are aware will surely remember that Y2K appeared at the end of the feature film. In reality, it is much more interesting and impressive machine.

Its silver gray color gives it a certain class, the black livery a real elegance; however, the design of the machine is not very appealing. In fact, one would almost have the impression of being in the presence of a calf.

But coming to the horses, it’s no ordinary bike. The engine is powered by an enormous 300 HP motor; and the red zone starts at 54,000 RPM! That’s not all; the engine gives you 576 NM of torque and catapults you beyond 400 km/h with an absolutely sublime noise. Furthermore, to end every kind of competition between the rivals Hayabusa and ZX-12R; MTT decided to install a helicopter turbine within its frame. 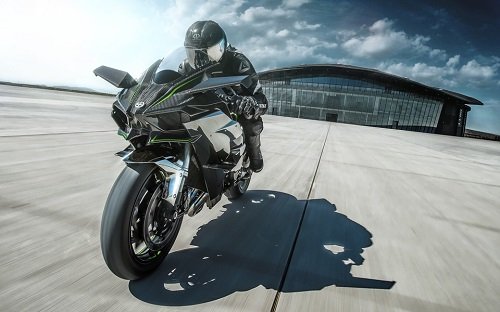 The release of the Kawasaki Ninja H2R did not surprise anyone, because a few years earlier the Japanese company had already successfully tested its strength in the supersport class, offering motorcyclists the ZX-14R model. And it was not at all surprising when the brand launched their most powerful serial hyperbike in the world, The H2R, because this is what we expect from Kawasaki!

The most expensive, most powerful, and most mass-produced hyperbike, the new “Ninja” has set a new quality standard in its class. It has everything a rider ever dreamt of; power, agility, dynamism, and effective braking. And it goes without saying, an optimal balance is also necessary between all these parameters, and you have that as well. All in all, Kawasaki H2R is the most perfect sports bike you can find, and if you still believe that money can’t buy you happiness; think again my friend. 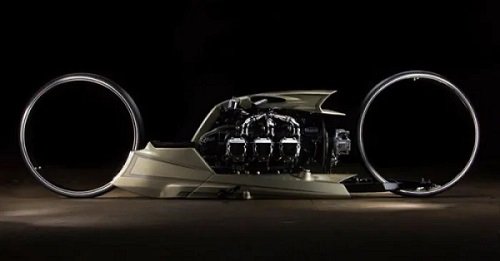 Formula 1 drivers love speed and different techniques, so some of them are looking for alternatives after retirement. Brazilian Tarso Marquez (former Formula 1 racer) decided to do just that. He designed and built a fantastic concept motorcycle that is powered by an airplane engine. The Tarso Marques Concept Dumont is an incredible futuristic motorcycle with an airplane engine and hubless wheels that looks like it came from Tron.

Having a very ‘steampunk’ look and some superb chrome around the wheels, Dumont is powered by a Cessna engine that makes you want to take off. Pushing the throttle should raise the heartbeat, especially since its power does not seem to be in synchronous with its swift maneuverability. Unfortunately, you may be lucky enough to be able to ride it, as it is a unique model, a concept as its name suggests, not available for sale and not legal on the roads. 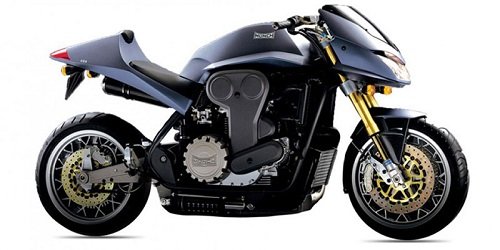 From the 1970s to the year 2000, Münch Mammut set standards in terms of performance. Back in the old days, while in competition for producing the most powerful motorcycle, even the big brands stood no chance against this manufacturer from Hesse; the golden tip of their pyramid was of course the Münch Mammüt (Mammoth).

But anyone who thinks that the exceptionality of the Münch Mammut only consisted of their massive performance is wrong. The Hessian manufacturer also believed in innovative technology as well, for instance, they designed the left side of the rear swing arm to be hollow and built the drive chain into this hollow space. This closed rear wheel housing extended the life expectancy of the chain significantly.

However, this detailed manufacturing also had its downsides; the production costs often exceed the sales value and, despite their legendary status, Münch never become a bestseller. A total of 478 units were built between the founding and the closure of the Münch plant in 1980. But even then, the story of the Münch Mammüt does not end. 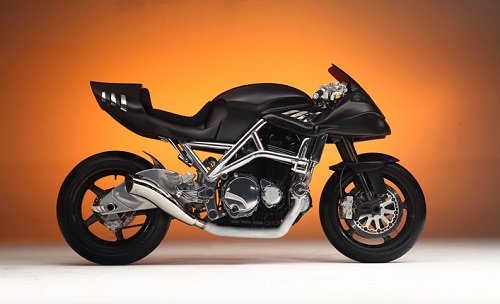 We all know perfectly well that the Rapom V8 is the most powerful motorcycle at the moment. But Icon Motorcycles are planning to put an end to this with their 250 HP Icon Sheene sports bike at just $145,000. The name of the motorcycle may sound familiar to you, and you are not mistaken, because it is named after the legendary racer Barry Sheene. The Nottinghamshire-based company plans to build a total of 52 machines.

The motorcycle, capable of accelerating to 325 km/h, is equipped with a modified hand-built Suzuki GSX1400 engine. It is equipped with all new valves, Wiseco pistons, turbochargers and much more. Thanks to all these improvements, the power reaches 250 HP and outputs a torque of 180 NM’s. The engine is housed in a Spondon aluminum tubular frame; it has an aluminum swingarm, Bitubo suspension and USD forks.

Comparison of Top 50 Most Powerful Motorcycles

How to winterize a motorcycle properly

How to not die on a motorcycle