The Truth About Fingerless Motorcycle Gloves 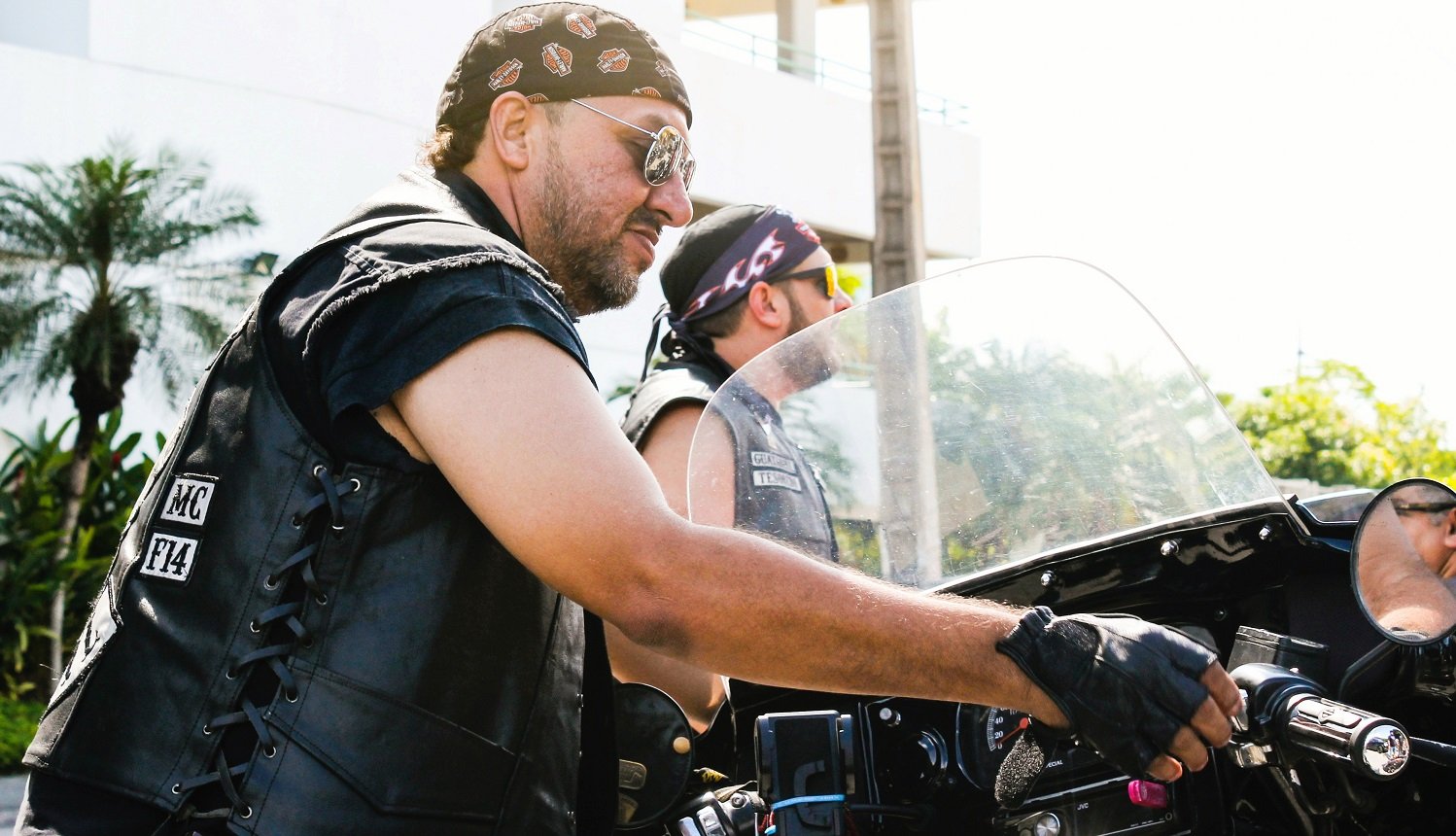 Gloves are considered to be one of the most essential protective equipment for motorcycling. They are responsible for shielding from vagaries of the weather while simultaneously protecting from any kind of impact in case of a crash or a fall.

For this reason, there are many different types of models available depending on the riding style; from urban commuting to adventure touring, there are endless options to choose from.

However, the ability to protect and shield the hands from any kind of abrasion or impact is not their only function, as these gloves also prevent the hands from slipping down the handlebars, thus making maneuvering more comfortable. And for this precise reason, many motorcyclists prefer wearing fingerless gloves.

But how exactly do these fingerless gloves function in terms of safety and how practical are they in the real world? Today we are going to discuss this in detail. So, without any further ado, let’s get started.

What are fingerless gloves

In fact, fingerless motorcycle gloves are one of the most comfortable options for warmer months. And, just like any other summer riding gloves, they are designed to provide a good grip around the handlebars, thus reducing the possibility of slippage.

Plus, they are a great alternative for someone who is looking for a highly breathable, ultra-light gear that protects the palm to some extent but more importantly allows maximum comfort. Needless to say, these fingerless gloves are not suitable for extreme riding conditions, as the hands are partially protected leaving everything to chances.

Primarily, these are preferred by riders who idolize vintage bikers. But unlike the predecessors, modern day fingerless gloves offer advanced features such as reinforced knuckles, pre-curved construction, and an all-leather design to make them more robust as well as chic. In addition, they boast a retro look, making them ideal as a glove as well as a fashion accessory.

Fingerless gloves are nothing more than an ordinary pair of gloves that are more centered towards styling rather than protection. On the other hand, full-fingered gloves have become mainstream when it comes to extreme motorcycling.

As far as safety is concerned, let’s look at some of the standard features that a fingerless glove offers: A decent fingerless motorcycle glove will typically incorporate thermoplastic rubber (TPR) around the knuckles, breathable fabric at the top, and padded reinforcements over the palm.

These characteristics and safety attributes make them an ideal pair to be used while commuting in the city. Moreover, the level of comfort provided by them is second to none in comparison to any full-fingered gloves.

However, due to their fingerless design, the most critical part of the hand is always exposed while riding. And no matter how much coverage is included on the remaining part, in the event of an accident, the uncovered fingers will be subjected to a great deal of abuse, which could potentially lead to serious injuries.

According to CDC (Centers for Disease Control & Prevention), an analysis on 1.2 million motorcycle accident victims revealed that 47% of the time, riders are likely to injure their hands. And depending on the severity of the accident, riders run the risk of third-degree burns (caused by the friction from asphalt) as well as permanent disability. And while no motorcycle gloves can completely protect the hands from serious falls, a slight tumble experienced while wearing fingerless gloves would be far worse than a serious crash experienced while wearing full motorcycle gloves.

Why do bikers wear fingerless gloves?

Despite strong competition from classic full-finger motorcycle gloves, half-finger or fingerless gloves have become the most popular summer riding gear among bikers. Indeed, their practicality and real-world significance do raise some doubts, but these opinions do not deter our young riders from wearing them.

When they were originally introduced in the 16th century, the purpose of fingerless gloves was to allow army troops to continue their work without risking frostbite. The intent of these fingerless gloves was to leave the tips of the fingers exposed so that the troops could continue with their work without sustaining any major injuries. Modern day fingerless motorcycle gloves adopted the same concept and thus allowed bikers complete freedom whilst providing some kind of protection.

Moreover, these gloves allow riders to use touchscreen devices on the go. They also assist while operating brake & clutch levers without running the risk of blisters across the palm. But that’s not all, they instill a very strong biker feel and also showcase a very strong sense of style in the motorcycling community, especially among the ones who ride choppers.

The reality is however different, as the rider wearing these fingerless gloves looks nothing more than a wannabe biker. And so, it is highly likely that he/she will end up giving fingerprints in future. Which will hardly be a problem in this case!

Fingerless gloves are commonly used by chopper riders who want to enjoy open roads and warm weather. They are really lightweight and are made from breathable material in order to ensure maximum comfort.

Full-finger gloves, on the other hand, are more suited for serious motorcycling. Be it urban commuting or multi-day touring, there is no better alternative than these full fingered gloves. In fact, they are ideal not just for cold weather riding, but for summer riding as well, owing to their mesh type construction.

A full-fingered summer glove is made of leather or textile fabric with a simple Velcro closure on the cuff. Thanks to this material you get plenty of grip on the handlebars and a great fit owing to the hook-and-loop mechanism. Furthermore, the knuckles are padded, the impact zones are reinforced and, above all, the fingers are equipped with accordion stretch allowing easy operation of the brake and clutch levers. So, if you think that a fingerless glove offers more mobility than a standard motorcycle glove, think again!

In addition, all the standard (full-finger) summer motorcycle gloves have perforations on the surface of the hand and on the fingers to ensure good air circulation. And depending on the style of riding, there are different gauntlets (short and long), that not only protect the wrists, but the forearms as well.

And do we still have to mention that a fingerless glove exposes your fingers to not only flying roost, debris & stones, but also to the harmful rays of sun. So, even if you are fortunate enough to avoid a mishap, you will certainly end up with tanned fingers (imagine what a half-tanned hand would look like).

That said, there’s no doubt that fingerless gloves are much cooler, both in terms of attitude and perhaps temperature. And we do agree that these gloves look suave, but in terms of safety, which is the main objective of any motorcycle gear, these gloves are clearly lacking. We do not want to preach, but safety is in your hands (literally).

First and foremost, since your fingers are completely free, you have the freedom to do a lot of tasks that are usually trickier with a full glove. For example, taking out coins from your pocket would be much simpler. Likewise, lighting up a cigarette (although condemnable) would be much easier. In fact, the mobility of the fingers would not be affected in any way due to a tight or loose fit.

The second advantage with fingerless gloves is that riders can feel exactly what they are doing, as the sense of touch is not affected in any way by the fabric of the glove. This usually helps novice riders who are not used to wearing a heavily padded motorcycle glove.

The third and probably the most significant advantage, which is actually a decisive factor among motorcyclists, is its ability to perform well in warm weather. In fact, the possibility of perspiration is reduced to zero while wearing one owing to their design, making the ride pretty comfortable.

Lastly, due to their minimal protective features and relatively small coverage area, these gloves often weigh less than conventional motorcycle gloves, thereby reducing the possibility of fatigue. Consequently, the rider can focus more on the adventure than on himself.

While the drawbacks of a fingerless glove are numerous, we will start with the most important one: A fingerless glove is in no way capable of completely protecting the hand. The exposed area around the fingers leaves the motorcyclist vulnerable to multiple forms of injury that can even lead to third degree burns as a result of friction from asphalt.

In addition, their use is strictly limited to only one form of riding. As such, these gloves cannot be used by someone who specializes in touring, sport touring, track racing or dirt biking.

And while you risk your exposed fingers to all sorts of mishaps, the fortunate ones end up facing flying debris or bugs all the time.

Plus, these gloves do not keep the hands warm when the weather turns cold. You will eventually have to purchase a dedicated motorcycle glove to protect yourself from vagaries of the weather.

Moreover, these gloves do not perform well in the rain. Imagine riding with one of these during a rainstorm; not only will you end up with completely drenched hands, but the drops of rain will more or less strike like pins and needles against your exposed skin.

And what good summer gloves are they if they don’t protect against sunburns! Plus, it’s kind of amusing to see someone with a semi-tanned hand. Don’t you think?

Most accidents involve the head, hands, elbows and knees, all of which can cause serious injuries. And while it is important to protect your head when riding a motorcycle, it is equally important to protect your hands (and other areas of the body). And no matter what part of the body is injured, abrasions around the hands will always accompany it. This is because, as a natural instinct, riders try to brace themselves from impact using their hands. Now imagine this scenario while wearing a fingerless glove!

With this in mind, it’s important to prioritize safety over comfort by choosing the right motorcycle gloves basis your riding style. A fingerless glove, no matter how good you think it is, will never completely protect your hands in the event of a fall. Be wise and make the right decision.